Aaron Sorkin didn't prepare us for this. 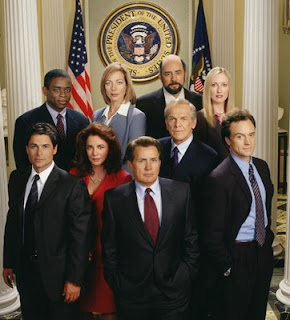 A friend of mine likes to say: "Democrats eat their young." She most recently repeated it while bemoaning the inability of a filibuster-proof majority to improve health care in America. There's no question: they beat themselves.

The last time the Democrats suffered a depressing defeat was in Bush v. Gore (2000). Fortunately back then we had The West Wing (1999-2006), the television drama about life inside the White House. Not only did it win many notable awards, not only did it give Democrats a president they could pine for in Josiah Bartlett, it taught us valuable lessons about national politics. Could the show help me understand today's political climate? I pulled three episodes with relevant story lines to compare with real life.

The show starts with a presidential veto. The Republicans might have enough votes to override the veto, and it's up to Toby and Sam to get enough congressmen to vote against the override. One Democratic holdout, Congressman Kimble, realizes he's got the White House by the balls and asks for an inordinate number of special allowances in return for his vote. It looks like they'll have to give in to Kimble until they realize that by offering those same allowances to a moderate Republican, they can earn the vote while simultaneously teaching Rep. Kimble a lesson: play ball or play alone.

Back in real life, could you imagine the Democrats getting one single Republican Senator to support their health care bill? No way. Not even by snubbing Nebraska Senator Ben Nelson, who wrangled a deal that gave Nebraska a completely free ride on Medicaid costs. Nelson was the lone Democratic holdout, the last one to agree to vote for the bill. As we'll soon discuss, this protracted holdout was one of the key events that prevented a bicameral health care bill to reach Obama's desk before Congress lost its filibuster-proof majority.

West Wing Lesson: If you ask for too much, the Democrats will just find someone who wants a little less.

Real Life Lesson: If you ask for too much, you'll screw everybody.

The Senate is preparing to pass The Family Wellness Bill. (For crying out loud, a Wellness bill!) Senator Stackhouse starts a filibuster. This surprises and baffles the White House. Late in to the night Donna Moss discovers that Stackhouse's grandson has autism, and everyone realizes that all Stackhouse wants is more money for autism research. Stackhouse would rather die on the podium than see the bill pass without consideration of his special interest. President Bartlett, a grandfather himself, empathizes with Stackhouse and alerts other Grandpa Senators to Stackhouse's intentions. Stackhouse wins, as does everyone else in the United States.

In theory, great filibuster responsibility comes with great filibuster power. In reality, that doesn't mean a thing. The failure to pass a moderately substantial health care bill without a filibuster-proof majority is evidence of this. I've come the conclusion that it's impossible to get anything substantial done in Congress unless you either implement a massive deception campaign, or have a supermajority (Even then, a supermajority is no guarantee. It probably doesn't hurt to throw in a little deception campaign.) I liken it to the California legislature which needs a supermajority to override any destructive California Propositions. (The California Proposition system is a legislative tool that enhances the task of balancing state law by wrapping it in a pan of Jiffy Pop popcorn.)

West Wing Lesson: The filibuster is a powerful tool to be used sparingly in times of critical need.

Real Lesson: Majority rules, but supermajority super-rules. Unless it's a supermajority of yammering idiots. Oh, and also, Congress is staffed on all sides by thugs who will lead us to self-implosion.

In the prior episode, Separation of Powers (5x07), Congress fails to negotiate a budget, the government runs out of money, and is shut down as a result. In this episode, the White House and Congress wait a couple of days for each other to cave. The President blinks first -- he's willing to reduce the federal budget by two percent to get restart the government. As a dramatic gesture, Bartlett walks to Congress to re-open budget negotiations. Wikipedia continues the story:


By marching to the Capitol, the President humbles himself and thus re-gains public support by symbolically proving that he is the one who is willing to make the effort to overcome the impasse. Speaker Haffley's counter-measure -- snubbing the President by refusing to meet with him right away -- backfires when the President eventually leaves, indicating to the public that after the President had taken the first step to resolving the shutdown crisis, it was Congress who had chosen politics over negotiation.


Who in real life recently managed to squander their precious advantage? You see my point. Even though real-world Congress passed bills passed from both houses, the reconciliation of both bills was never going to be possible because, among other things, the poisonous amendment  giving Nebraskans
free Medicaid. I can't blame the failed health care legislation on Nebraska Senator Nelson. I can't even blame Senator-elect Scott Brown or the Bay Staters for the soon-to-be-failed healthcare effort. The legislation was doomed to fail. I blame the Democratic party. Their members can't point in anything that remotely resembles a similar direction.

West Wing Lesson: Greedy people are experts at wasting time and imploding. Windows of opportunity are short, don't miss them.

I learned lots of other useful things from The West Wing. For instance, if you piss off your girlfriend, make it up with a mix of flowers, books, videos and popcorn. You can make it rain by smoking in church. I also learned that Democrats can be a force for good when they band together and ... no ... wait. They never made that episode.

bravo fine chap! I couldn't have made this rant better myself!