The Los Angeles Festival of Books 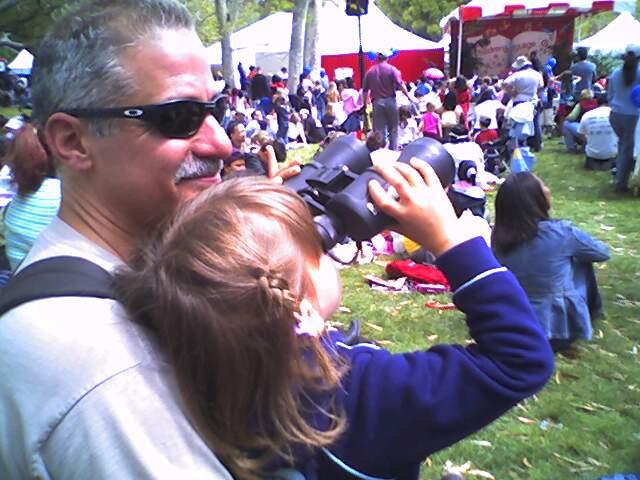 I went to the Los Angeles Festival of Books today. That was a fantastic event, a must see for anyone who can get to it. We went there with friends of ours, Lynn and Josh, and their daughter. I was looking forward to seeing them because I had been listening to the radio a few weeks ago and happened to hear Josh's name mentioned, and heard his voice as a bonus. So I was excited because I wanted to speak with him about it.

We met them at the children's stage. We settled in, and I turned to Josh and said, "So I heard you on the radio." Josh says, "Yeah, I heard you got locked out!"

I should back up. A few weeks ago I was driving with my wife down National Boulevard. No, that's half of it; we were driving in separate cars. I was following her down National Boulevard, and we were running pretty late. Now, those of you who know Los Angeles better than I already know there are two National Boulevards and perhaps the reason we couldn't find our destination was because we were on the wrong one. Never mind. The important thing was we were lost and running late.

So I'm driving behind Beth and listening to the radio when, like I said, I hear the reporter mention Josh's name and so on. I'm like, "Hey! I know him!" And it was nice because he doesn't have the easiest name to pronounce, and those of you who know me know that I consider it important to know how to pronounce someone's name.

Now the way Beth tells this story, I did not call her on her cell to give her the news, but, I should note at this point I did, in fact, call her. This turns out to be irrelevant.

Not long after the point when, depending on your point of view, I called Beth, we stopped at a red light in a long line of traffic. Something which I hadn't told you was that I expected that Beth would not have eaten, so I prepared by packing some celery sticks and peanut butter, and a mozzarella stick, to give to her at the right time. I'm good that way. So we're stopped at this red light, and I figure I'll get out, run to Beth, give her the food, and hop back in the car. Having locked myself out of the car many times in my life, I knew that the important thing to do was open my window so, in the event that I do lock the door, I can merely reach in and remain cool.

Alright. Time for action. I lower the window, lock the door, get out, run over to Beth and knock on the window. Beth freaks out because I had surprised her. She opens her window and I toss the food in and run back to the car, only to realize, as I had just typed, that the car door was locked, in the middle of a busy street, and the engine running to boot. True, I had opened my window, except it was just open enough that I could get part, but not all, of my hand through it. I pushed my hand, pulled it out, pushed it in, pulled it out, pushed on the window, and so on. Finally I took off my office access badge, which hung around my neck on a string, and frantically attempted to unlock the door by looping the string around my door lock. After 10 seconds of this, the woman behind me watching dumbfounded, Beth's repeated attempts at making contact by yelling my name finally caught hold. I looked at her, and saw she was dangling a key, a key to MY CAR, out her window. It's one thing that your wife has a spare key to your car in case she needs it. It's another thing that she carries it with her, even when she's driving her own car, because she knows your capacity for bonehead moves.

So I ran over to Beth, grabbed the key, ran back to my car, looked at the woman in the car behind mine and explained to her that it's my wife in front by pointing at my wedding ring and then thumbing back at Beth's car, unlocked the door, and got in, just in time for the traffic to move after the light had already changed to green. Cool as a cucumber.

It turns out that Beth told this story to Lynn, who told the story to Josh, but as the game of Operator goes, Josh believed that I actually ran over to Beth to tell her he was on the radio, and a dollar says it wasn't Lynn who made that adjustment. I insist that I called her on the phone, but really, in what position am I that making that clear exonerates me of buffoonery?

And that's who we spent the afternoon with at the book fair. But it was nice because I saw all these interesting booths of writers, publishers, and so on. Carl Reiner was on hand to read, "The 2,000 year old man goes to school." Hey, he came out, that was good, and he had a nice attitude. I wandered around, found a lovely cookbook booth, an ACLU booth, the Huntington Library booth (which was good because I had questions about their upcoming Newton exhibit) and the KPCC radio booth. KPCC is an NPR affiliate and I like their reporters, so I spent a minute briefly chatting with someone; mere small talk. As I walked away, Josh approached, and he said, "Hey, that's the guy who did the story on me," pointing back at the KPCC booth. I realized that the person to whom he was referring, the person whom I just spoke with 30 seconds prior, was Adolfo Guzman-Lopez, a well known KPCC reporter. I hear his stuff all the time. I should have recognized him to begin with, but it was nice that I could have the opportunity to speak with him again. So we go over, Josh says "Hi" to Adolfo and I introduce myself. Josh says, "Rob heard your report [about me] on the radio." Adolfo says, "The one who locked himself out of his car?"
Posted by konberg at 2:28 AM

Email ThisBlogThis!Share to TwitterShare to FacebookShare to Pinterest
Labels: funny

I laugh out loud every time I read this story, particularly the surprise-ending-Adolpho-Guzman-Lopez-ironic-twist.... XXXOOO your wife