On Teaching Ultimate Frisbee to Children 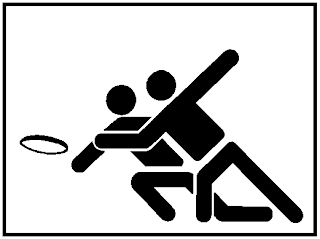 In September I started teaching co-ed Ultimate Frisbee to local middle school children. I spend three hours a week every Sunday assisting the coach, an impressive woman who balances teaching skills against just having fun, and somehow manages to corral the 30 boys and girls into doing drills and wearing pinnies.

And I don’t know if you’ve seen middle school children recently, but it's scary to be an isolated adult surrounded by 30 kids you've never met. What if they don’t listen to you? What if they don’t like you? So I laid back, helped the coach, and focused on very basic things: throwing, catching, one-on-one attention and congratulating good effort.

I saw a girl look dejected on her first day. I asked her what was wrong but I already knew: the boys weren't throwing to her, and when the disc was at her feet, another boy on the field would tell her to not pick it up so he could throw it. There wasn’t too much I could do about getting the boys to throw to her; that’s a problem anyone who's played any co-ed sport can understand (though I explained to both sides that you're less likely to score when you only look to throw to your friends). But when the Frisbee is at her feet?

“Just ignore them and pick it up!” I said.

Two weeks later during a pick-up game the Frisbee fell at her feet. She turned to get away from it when I yelled “Pick it up!”

She threw to another girl for a goal.

Another boy had the opposite problem.

“Nobody on my team picks up the Frisbee, and I have to pick it up every time!” he complained.

Apparently he didn’t like being forced to put the disc in play. OK. Simple advice, of course. Don’t pick it up! Someone else will eventually get it. He picked it up twenty minutes later.

“Hey! I thought you weren’t going to do that anymore.”

A third child is quite a good player. He likes making farther-distance throws, but long unfocused throws have a low-percentage chance of being caught. So his skill isn't translating into completed passes. I suspected his problem was a lack of focus and a desire to huck the disc (colloquial for winding up and letting go), so after his third low-percentage throw I spoke with him.

“The next throw you make, I don’t care how far it goes, I want it to connect.”

He looked shocked. But sure enough, his next throw was a good high percentage throw. But it was blocked! Someone on the other team was on the ball and blocked it. He turned to face me and yelled “It wasn’t my fault!”

His next two throws were excellent short-distance throws that found their targets.

The thing I had to remember is that kids that age are more emotionally delicate than they let on, so negativity has no place there. And I have to hand it to them: none of the kids call each other bad names, and nobody gets chastised over making mistakes.

This past Saturday the kids had their first scrimmage of the season against another team. I helped by motivating the team with non-stop encouragement and high-fives. Near the end of the game, I caught a player from the other team defending by blocking an area with his arm. A potentially illegal move, and an un-spirited play! I got angry! What a little punk! I let the anger dissolve and spoke with the other team’s coach so he would know to help the boy understand the non-contact rule. The coach explained. “Sure thing. But so you know, he’s only been playing for two weeks.”

I was relieved that I waited before speaking and awful at how poorly I read the situation.

After the game I approached the boy.

“Really?” he asked. He spoke with a soft voice. Such a boy!

“Sure! Did I hear you have only been playing for two weeks?”

“Yes.” Again with the soft voice.

“Well I wouldn’t have known. You play like someone who knows what he’s doing. Keep it up!”

I am looking forward to next Sunday.
Posted by Foodberg at 9:11 AM

Email ThisBlogThis!Share to TwitterShare to FacebookShare to Pinterest
Labels: ultimate-frisbee

K-Rob, I can't imagine a better person to be working with fragile middle school egos. Your unflagging enthusiasm is just one of many qualities that makes you perfect for that job. If I had junior high kids, I would definitely want you coaching them.

Rob, I love your insightful commets. I've worked with these kids and appreciate your perspective. Keep up the great work!