Variants And My Love For Slitherlink

In the last year or so I've become addicted to a puzzle game known as Slitherlink. Here's the premise of the game, as described on Wikipedia:


Slitherlink is played on a rectangular lattice of dots. Some of the squares formed by the dots have numbers inside them. The objective is to connect horizontally and vertically adjacent dots so that the lines form a single loop with no loose ends. In addition, the number inside a square represents how many of its four sides are segments in the loop.

Other shapes can be used in lieu of the standard grid, as long as each tile has 4 sides. These include snowflake, penrose, laves and altair. They add complexity by increasing the possible paths from an intersection, but the same rules apply to their solution.

If that didn't make sense, let me show you a fairly simple version of this puzzle. Starting with this unfilled grid, 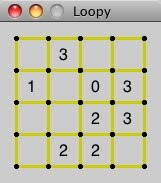 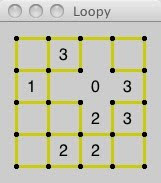 Now let's look at the neighboring cell with a '3'. Since one of the four neighboring segments have been removed, it's obvious that the other three lines participate in the loop. 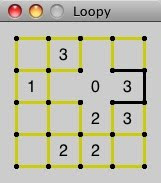 This goes on until the puzzle is solved. 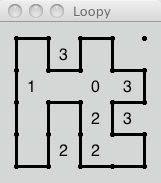 The version It's available as part of Simon Tatham's Portable Puzzle Collection, but there it's called Loopy. One of the nice things about Loopy is that it provides different difficulty levels, and formats other than squares.


After playing for a while you get a good sense of strategies and can play more and more difficult variants. Here's one that I worked on for almost four hours until discovering a problem in the upper right corner. 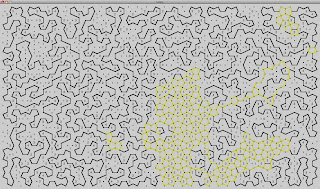 With regards to using dictionaries and online tools to solve crosswords, Will Shortz credits his predecessor at the New York Times with this quote: "It's your puzzle. Solve it any way you want." Similarly, you can solve Loopy puzzles any way you want. Here are some of the variants I've come up with while playing:

Speculation: Since Loopy allows you infinite levels of undo, it's easy to use speculation as a puzzle-solving tactic. For instance, if you're not sure whether a particular line segment is part of the loop, you can merely  start traversing in a direction to see what follows. If you're taken to an impossible position, you know your guess was wrong, and that the opposite of your guess is correct; a proof-by-contradiction if you will.

There are problems with the speculation variant, though. One is that it only really provides information when your guess turns out to be wrong (unless your guess leads you to completing the loop.) If your guess is correct, or perhaps it just leads you to another position that requires more speculation, you get no concrete information. So using speculation requires making good choices: speculate in small areas where you'll quickly corner yourself.

Another problem with speculation is that you have to remember where you made your guess. While undoing your guesses, if you're not careful, you'll undo too much, or worse, not enough. How I typically address this is by clicking on my guess so many times that when rapidly undoing, it also undoes my many clicks, so visually it looks like a rapid flash.

No speculation: After learning more and more solving techniques, you have less of a need to speculate on the board, and can either solve more complex parts of a puzzle in your head, or better, handle speculating in your head. The no-speculation variant just means just that: no speculating is allowed. If you mark a segment in the puzzle as part of the loop, or not in the loop, it's because you know it to be so. The four-hour mega cairo puzzle above was played with no-speculation.

No undo: A variant of no-speculation, but it requires surprisingly more focus and hand-eye-coordination. When I typically play no-speculation, if I accidentally mark a segment I didn't intend to, I just undo and correct it. No-undo basically means, no undo. It's not quite the same as choosing to solve a crossword puzzle with a pencil or pen, particularly for larger puzzles. Very often you find yourself seeing several obvious steps, and you're bound to make a mistake if you're lazy or not paying attention.

Mark segments only: Although I haven't explicitly said this yet, every segment in the loop can be in one of three states: undecided, on-the-loop or off-the-loop. (These can be seen in these screen captures as yellow, grey and black.) Clicking on an unmarked segment marks it as on-the-loop; right-clicking marks a segment as off-the-loop. On a Mac, there's no right-click -- you have to press the command key in conjunction with a click. So while you can play one-handed on Loopy for Windows, you can't play one-handed on Loopy for Mac. So I discovered this variant where you were only allowed to mark lines as part of the loop. No marking lines as off-the-loop.

This makes the game considerably more difficult. Any segments that you know are off the loop have to be managed by your brain. I tend to not play this variant too often.

Clear only: The opposite of mark segments only. You can only mark those segments that are off the loop, at least, until the puzzle is complete. I've discovered some interesting strategies trying to solve puzzles with this restriction.

Here's another partially completed puzzle. On the left only segments out of the loop are marked. Marking segments that I know are in the loop provides much more information.

This is currently my favorite way to play.

Basically you start the game like you're playing clear only and when you find it most valuable, start a line segment. 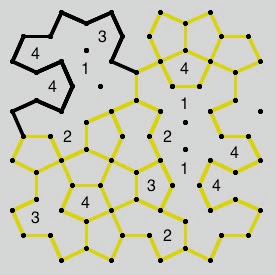 In the sample puzzle above it's obvious that everything in the lower right corner of the puzzle is on the loop, but they can't be marked as such. The lower left also has some obvious spots. Maybe in a couple of moves I can connect the lower left to the single segment.

When playing this variant I tend to keep my board free from a single segment for quite a long time. Often if I want to mark a region, the marking doesn't necessarily buy me anything. So I often find thinking about creating a segment as a way to study the puzzle.

On paper: Try printing the puzzles on paper. It feels like an entirely different puzzle.

But if you do play Loopy, by what rules do you play?

Update: Writing this post encouraged me to do try a large puzzle again, but this time playing clear-only, one continuous segment. no speculation. I'm just getting started, as you see. 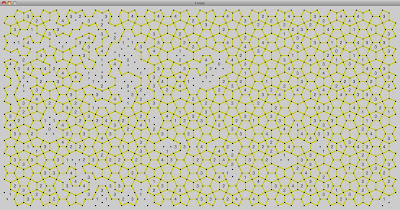 Update: (Sunday 10AM) I've clarified the way to play clear only, one continuous segment.
Posted by Foodberg at 6:15 PM

Just what I need...another time-consuming puzzle game on my computer. I shouldn't have read the post :-)

Brings back memories for me of being stuck for a few days in sticky, tropical Dar-es-salaam, Tanzania a couple of years ago, with nothing to do. There's not even a cinema in that city. As far as I can tell, the ex-patriates in Dar-es-salaam mostly try to drink the boredom away.

I bought a puzzle book which had - amongst others - these things you call Slitherlink. I sat in my airconditioned hotel room for the most part of each day, doing all the Slitherlinks in the book.

I am addicted to Slitherlink as well. I used to play on a different site (puzzle-loop.com), but Simon Tatham's version is much better because of the advanced versions.

I also just found out that there is an Android version of his games (http://chris.boyle.name/projects/android-puzzles). Now I guess I will play even more :-).

Steve, I know the feeling. Loopy is really quite good. What's amazing is how easy it is to be overwhelmed by the new patterns, but you can quickly find interesting solving techniques.

Mike, I have tried puzzle-loop, but it just isn't that great. I mean, it's a nice technical achievement, but the mouse response seems a little clunky.

I had no idea about the android version. I may have to avoid that.

I had gotten myself off of this game for more than a week before you posted this, you asshole.