John Pizzarelli at the Bronx High School of Science 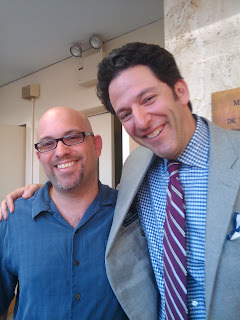 We found out that John Pizzarelli was performing at the Bronx High School of Science today. Since both my wife and I really enjoy his music we decide to go. The tickets were fairly inexpensive, only $25 apiece. Unfortunately we were twenty minutes late. Who knew that driving 30 block on Jerome Avenue would be do difficult?

John led a four-piece band today, with his brother Martin on bass, and two people I did not know playing piano and drums. I've seen John Pizzarelli play three other times, and typically it was John, Martin and Ray Kennedy on piano. Fortunately, the pianist and drummer cooly showed their stuff. He also had an occasionaly guest violinist whose name I cannot recall, but was clearly talented (and apparently very young, only two years out of college.)

Every set I've seen John and his band play has been significantly different from the others. I finally realize that I can't expect to go back and hear the songs I liked from the shows before. He seems to have an encyclopedic knowledge of American standards (a la Jonathan Schwartz, whom John seems to be able to imitate to comedic effect) and now I hope his next show is entirely different, though I hope he doesn't take I Like Jersey Best out of rotation.

An unexpected surprise was a 3 or 4 piece set with the Bronx Science High School Band. High school bands are high school bands, that's for sure, but this band could definitely beat up my old high school band. That segment was fun and a little sweet.

After the show, John sat in the lobby, signed CDs and chatted with guests. He's friendly and warm, and was very happy to pose for a quick photo. I didn't have high hopes of my G1's camera quality, but this time it came out pretty good.

Why were they performing at the Bronx High School of Science? It seems as though John's son is a student there, and if the program is any guide, John has been playing fundraising concerts for his son's school for many years.

Finally, we were told that tomorrow is John's birthday, so, hey, Happy Birthday, John.
Posted by konberg at 9:49 PM