Thoughts about Proxying the HTML5 canvas

This post is a blackboard for my thoughts around how to write tests that verify what's drawn on an HTML5 canvas. I'm still relatively new to Javascript, DOM and Canvas, so if there's an established solution to mocking canvas operations, let me know. My research hasn't yielded anything.

As part of my recent involvement with Dygraphs, I've become interested in automated Javascript testing. I'm currently writing some very basic automated sanity tests for Dygraphs using jstestdriver, and those tests should be committed to the Dygraphs repository fairly soon.

Many of the tests I want to write have to do with the graph's internal state, and not its visual aspects, but at some point I will need to test what's drawn. Because Dygraphs has an HTML5 canvas, I have limited options:
What I really want is a proxy that not only receives calls from a client and logs them for post-operation validation, but also actually draws on a real canvas. That way in the event of a regression I can view the backing canvas, which will serve as a clue to what changed. It also helps me understand just what kind of test is being written in the first place. 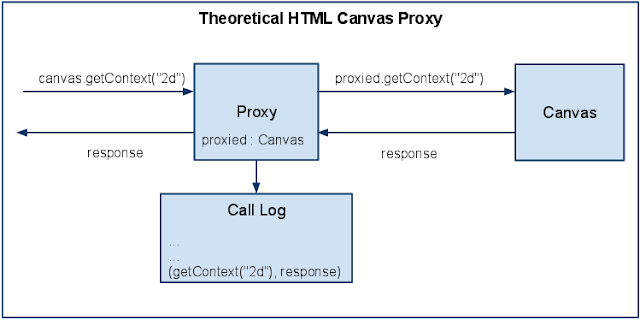 Today I set about to prove out the idea of a canvas proxy, and the truth is, it's just not going to happen the way I want. Here are the two showstopping problems I see so far:
The DOM element problem can be mitigated by faking not the canvas, but the rendering context that comes from calls to getContext('2d'). I always expected to need to fake out the context. This might work, but we will still have trouble with properties.

It may be possible to mitigate the properties problem with a hack that keeps properties in sync between the proxy and proxied object. For example:

I fear that a decent solution requires an abstraction layer that turns all mutations on the context into functions (e.g. context.strokeStyle becomes context.setStrokeStyle().) Is that good Javascript practice, or is that just not the Javascript way?
Posted by Foodberg at 11:52 PM