I flew out of SJC today. As mentioned on my Buzz post, I was worried about trying to bring a bottle of prescription cough syrup with codeine through an airport TSA checkpoint.

According to the TSA's website, each container must be 3.4 oz (100ml) or less. Medications are allowed in reasonable quantities exceeding 3 oz, and must be declared for inspection. I was also told to be prepared to verify that the name and address on the bottle correspond with my identification.

It's hard to read unless you view the full image but the bottle has tick marks for measuring contents. The bottle holds 120ml of liquid and at that time had only 100ml of liquid (which makes sense, I took two 10ml doses.) Of course, they wouldn't know that unless they examined the bottle.


So when I passed through TSA I dutifully presented the bottle to an agent on the outside of the security checkpoint, who told me to pass it through with the rest of my luggage. He did not ask for ID to verify that I owned the contents. I walked through the metal detector and waited for my belongings.

However, there conveyer belt stopped moving followed by a long delay. The agent responsible for scanning the X-ray view for dangerous substances was definitely looking at something. I didn't know what he was looking at, nor did I care, I assumed I would be quizzed about the bottle after which I would present identification. Instead he called over another agent, and asked for her advice.

Eventually I found out what they were making a fuss about: the Nalgene bottle attached to the exterior of my backpack.
There was a small quantity of water left in the bottle and they could not figure our what to do. I offered to drink the water. They ignored my suggestion and continued conferring. After yet a little more time, they passed the bottle through, allowing me to board my flight home. They never inspected the bottle of cough syrup. So, a 120ml bottle with 100ml of liquid was unexamined, but a Nalgene bottle with a little water in it underwent great scrutiny.

Just how much water was in the Nalgene bottle? Let's look. 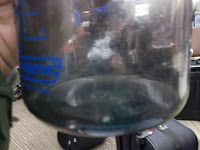 You should be able to make out the liquid at the bottom of the bottle. Below is another view of the scale on the bottle's side for reference. 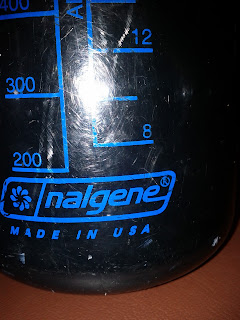 Eyeball it .. two ounces? One ounce?

I dumped the contents into a shotglass:

So they ignored a 120ml bottle (which ostensibly could have had 120ml of fluid) but stared at 23.6ml of water.

To be fair, it's possible they were discussing a finer point of procedure rather than the immediate potential risk of my water bottle, but it's not as if there wasn't a line of travelers behind waiting on this issue's resolution.


Thanks for reading. You may now proceed with the eye-rolling and advising better ways to spend time.

In the meanwhile, it's time to dose up on codeine and get some rest. Good night!

Darn. Was hoping for some good nudie scanner photos! xo

If you were to drink it you would still be bringing it on board, which is a no-no.

PS "Google Account" #fail. I entered my @gmail account and I got the multi-login "warning" page. Hitting "cancel" brought me to www.google.com, NOT back here. #fail.