Replacing my Mac Keyboard with a Logitech Internet Navigator 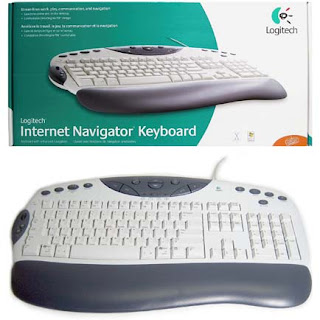 The Caps Lock key on my Mac keyboard was not responding so I pulled out the first keyboard I could find lying around: the Logitech Internet Navigator keyboard. You know the type: the one with buttons labeled "Search", "Shopping", "Favorites". It probably came with a machine I bought long back when. But you know what? I love it.

It has some nice features I came to expect from my Mac keyboard: volume controls, and media play/rewind/pause buttons. All those work as you would expect. There's also a little scroll wheel on the keyboard which I don't really need since I have a scroll wheel on my mouse. Even the "Sleep" button brings up the sleep dialog box. The only thing missing is a replacement for the eject button. (Update: downloading the Logitech Control Center for OSX did the trick. Now the only thing missing is a USB port.)

The only change I had to make for it to work well with OSX was to swap the behavior of the Command and Option keys (Pressing Command was sending Option and vice versa.) So thankfully the OSX keyboard settings allow me to reprogram the function of those keys, so I implemented a modifier swap. (Update: Once I installed the Logitech Control Center, the keys were swapped once more, Restoring original behavior of keyboard modifiers did the trick, effectively making this paragraph "Remember to install the Logitech Control Center and do nothing else."

As for general keyboard behavior, the keys have a nice tactile feel, you don't feel like you're constantly hitting the bottom of the keyboard tray as you do when using the Mac keyboard. It comes with a keypad on the right side, which I've come to expect with all my keyboards. The keys are slightly more smooshed together. But hey, nothing is going to do it for me quite like my IBM Model M. I just wish in this case that for "IBM Model M" the M stood for "Macintosh."

In retrospect, the keyboard and mouse that came with my Mac Pro were probably the first two such peripherals that I have ever thrown out due to mechanical defect. Oh, and their earbuds. And on the other side of that is Logitech: with the exception of one piece of hardware, I've never been disappointed with their products, and as of today I'm no longer disappointed with that one exception.

It's nice to be able to bring a 2002 peripheral with so many silly buttons to just work naturally with a modern OS. Back in 2002, all those buttons were pie in the sky. Today they're launching my apps.
Posted by Foodberg at 1:29 AM

Email ThisBlogThis!Share to TwitterShare to FacebookShare to Pinterest
Labels: hardware