I found copies of the two lost Tetris clones that I wrote in 1990 and 1991. [download] Now it's time to reminisce. 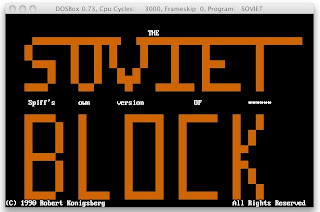 In 1990 I was a college Junior. For extra money I worked as a student consultant in the computer center. The consultant's office had two computers, a DEC VT220 and an IBM PC AT. We put a couple of games on the PC. My two favorites were Level 42, which I can no longer find, and a Tetris clone called Nyet. In fact, everyone in the office loved Nyet, and we all played for hours on end.

I was the fourth best Nyet player among the consultants. I know this because three people always inhabited the top ten high-score list, and I fought hard to get my spot on it. Occasionally I would manage to wrangle my way to the number seven spot, only long enough to brag about it before the other three would attain new high scores effectively pushing me off the list.

By Spring Break of 1990, I was tired of being unable to gain a solid foothold in the top-ten spot, so I did the only thing I could think of, I wrote my own Tetris clone. Armed with Turbo Pascal and a quiet week on campus, I wrote The Soviet Block. I added an extended block set, and some other nice features, making it sufficiently attractive to play. 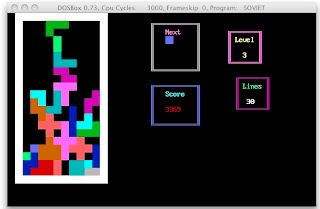 Surely, if it was my own version of Tetris, I should have a spot in the top-ten, right?

Wrong, of course. The same three people dominated the top ten spot. So I wrote another one.

Every good game needs a sequel 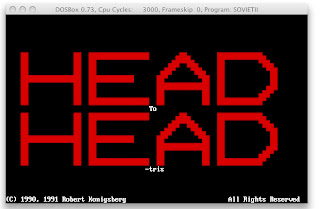 But this one was going to be a competitive two-player version. This sounds like old hat, but in 1990 there was no such thing as a competitive two-player version of Tetris. I envisioned it as a game of tug-o-war, where players faced off on opposite sides of the board. Bricks didn't move down, but toward the center. By clearing blocks you would actually shift the whole board toward your opponent. You win when your opponent loses the game, but more interesting is when you shift the board far enough into your opponent's space that it reaches a goal line, which ends the round.


By ending the round, you could use "dollars" accumulated by doing things like clear multiple rows simultaneously to buy features. For instance, you could slow the rate your pieces fall to the center for $3, but for $4 you do the opposite to your opponent. From there you start again with an empty board, pieces move slightly faster, and you need to clear more rows before being able to shift the playing area.

One of the interesting facets of this game was that once you started losing, you kept losing. It was tough to recover from being slightly behind. On the other hand, if the opponents were well matched, they were in for an exciting fight for survival during the tug-o-war, where both sides tried to lay bricks as quickly as possible without making a serious round-ending blunder, or worse, a game-ending one.

Here's a brief demonstration of Head-to-Head-tris in action.

I brought Head-to-Head-tris to the consultant's office, and, after long last, nobody could beat me! Only one person gave me a run for their money, and it had the desired exciting feeling of a back-and-forth tug-o-war. We were well matched.

I'm pretty proud of Head-to-Head-tris. It's a fairly playable game.

By May of 1991 I graduated, and moved on. As the years went on I lost my copy of The Soviet Block and Head-to-Head-tris, source code and all, until some time last  year, when I found it sitting somewhere on the net. The source code is still gone, but now you can play the lost DOS classic of the 1990's.

Start by downloading the DOS binaries and doc files.

On the Mac I use the DOSBox emulator.

Soviet Block is kind of tough to play nowdays, because I wrote it to work with a specific subset of processor speeds. You know, like, 4.77 MHz, but Head-to-Head-tris uses a processor-speed-free mechanism for its timing mechanism.

You're also likely to need to reset the keys, and remember to turn off the music. It's fun after the first game, after that, it is not.

Head-to-Head-tris is understandably more fun with another competitor, but you can play it alone. After all, that's how I tested it. Better still, let's meet in meatspace and play together.
Posted by konberg at 2:03 PM

Ah, what memories. This was the same period of time when we wrote the guts of the unreleased "Monty Python & the Holy Grail" virus. Those were the days.

The "head to head" game sounds a lot like Push Tetris, one of the modules in Tetris DS (2006).

@tepples: ha! Push Tetris sounds a lot like my game! :) Thanks for the reference.

DHoelzer, oh my goodness, I completely forgot about that virus. Yes, that was a lot of fun.