With the exception of occasionally seeing Uncle Floyd on his TV show, I didn't know what to expect. Though it was a small crowd of 25 people, Uncle Floyd was shockingly funny. It's clear he's done the same jokes for many, many years ("I'm the only working comedian left with a Bella Abzug joke.") and yet he was solidly funny. It's also a bit of a retrospective into yesteryear, with jokes about old-style remote control-free TVs, and Alfalfa and the Little Rascals.  Some cultural jokes were too early for me, and there were jokes that people younger than me would certainly not get.

Aided by his trademark plaid outfit and bow tie, Floyd was shamelessly self-deprecating, lamenting that after forty one years in show business he finally made it to the basement of the Maplewood Library.

For ninety minutes we all had a great time. 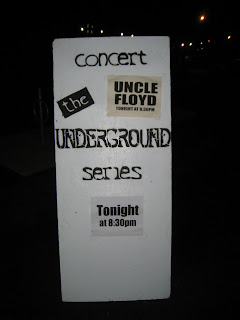 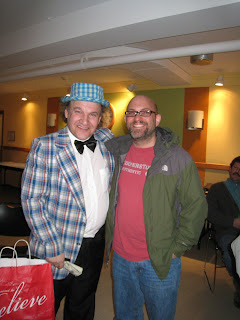 Maybe a certain other person we know, whose name starts with 'M' and ends in 'Ark of the covenant' should have an underground show.

Uncle Floyd was hilarious- I seriously did not know what to expect, but I laughed so hard my stomach hurt. Ice cream afterwards really helped ease the pain. :) Thanks to KONBERG (aka my wonderful husband) for a fun-filled date night

I forgot to mention one of my favorite jokes: "I grew up in Patterson, which isn't a bad place to grow up as a [w]hole."