Something surreal happened on Saturday:

Saturday night we went to Genghis Cohen with our friend Nancy and her good friend Dan, in advance of an evening of improv at Bang. Sitting right next to us was William Shatner. Wow! Talk about iconic! He was having dinner with a woman whom I did not want to disturb. So, OK, wow. Based upon the way both tables were placed and everyone was seated, when William Shatner spoke to his dinner date, his voice headed straight for me. Wow, what a voice! Deep and boomy! Boom! Boom! Boom! This, by the way, is not the surreal part.

Here's a good time to better explain how everyone was sitting, through the magic of Microsoft Paint: 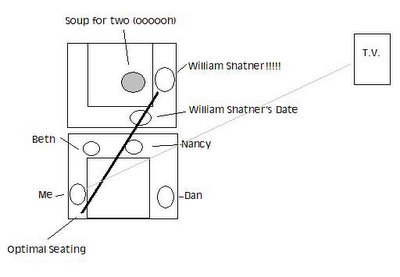 I really wanted to say hello. I wanted it so bad that I was willing to go beyond the fear that stopped me from talking to girls all through college. I asked my wife for advice; should I just turn to say hello? I whispered in her ear. "I want to say Hello, and I want to do it now; is it a good idea?" She whispered in Nancy's ear, but it took much longer. Nancy whispered in Dan's ear. I said to Beth, "You sad something else!" "Yes," Beth said, "I said 'Rob says he wants to say hello but isn't sure, and is behaving like a five-year-old about it.'"

Dan whispered back to Nancy, who whispered to Beth, who told me that I should wait until he was ready to leave the restaurant, so he could finish his dinner in peace. This made the most sense. Thank god he got up to leave, like, ten minutes later.

As William Shatner went for the door, I went after William Shatner and said, "Hi, I didn't want to disturb you at dinner, but I just wanted to say hi." William Shatner was nice, and said, "Thank you, thank you," still moving for the door. Then trying to be brief, I said, "I saw all your movies on opening night. The Star Trek ones." William Shatner said, "Oh my goodness." Actually that wasn't correct: I was actually trying to be brief. I meant to say, "I saw all of them, except the first two, cause I was too young, and the ones without you I didn't see on opening night" but in retrospect, that correction makes just as much a dweeb, or more of one, depending on your opinion.

To add to the bizzare nature of the evening, I saw one of my co-workers in the restaurant as I was paying, which is bizarre because she works in Mountain View.

On to Sunday morning.

Sunday morning I got an email offering me Lakers tickets. I spoke with Beth and jumped on them. Here was my second set of celebrity sightings, and I don't mean the Lakers. A brief list of the people who we saw at the game:
You may not know Xander Berkeley, and Beth and I did not know him a week ago, but he plays George Mason on "24". Just that morning, we were watching his character's swan song (spoiler post-alert!)

George Wyner, well, you know him. He's a character actor that's been on lots of stuff. The woman next to me was positive that it was Larry David, but Beth and I agree she was not correct. Neither of us could place him, but we knew he was "that guy". Finally, I remembered he was in the movie Spaceballs, and finally found him through a site called hey it's that guy.

There were a couple of other actor spots, but none that we could identify.

By the way, we all agreed that William Shatner looked much better in person than he did on television.
Posted by konberg at 1:21 AM

This is great stuff- you are a wonderful raconteur and very funny man- and cute butt too!