My Trip to San Diego

I'm in San Diego for two days of talking about Google and interviewing UCSD students. Google is presenting at a Women in Engineering luncheon, so I made sure to bring my diversity t-shirt with the iconic symbol for woman. While the Google store only has that logo in a woman's shirt, I have a man's style t-shirt with that logo, and it's a wonderful shirt to wear, particularly, say, when representing Google at a Women in Engineering luncheon.

I flew out of Santa Monica airport, which is a first for me. One of the other presenters at UCSD is a pilot and gave me a lift from Santa Monica airport to Montgomery airport in San Diego. While it was nasty, overcast and smoggy in Los Angeles at 3,500 feet, he quickly got permission to climb to 5,500 feet, and the view was wonderful. I imagine this response is typical, but I couldn't help feeling bad that I had to hold back asking the pilot to veer off his plan so I could see my house from the air. 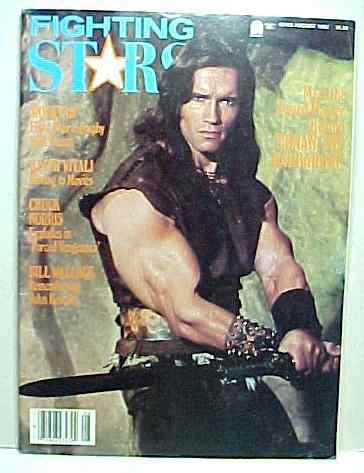 Here's the thing: before taking off, I was lounging in the airport terminal (read: room.) While my coworker was out of the "terminal", filling out paperwork, who should walk into the Santa Monica airport with his entorage? Did you guess from the picture? It was the Govenator, Arnold Schwarzenegger. He was wearing a blue blazer and crisp white collared shirt, and walked quickly into a room which was clearly prepared for him. Two or three security guys covered the "room". When I peeked through the occasionally-opened door, I could see a lighting umbrella, so he was being photographed or interviewed. I presume it was the latter, because he's in the middle of trying to get several propositions passed, and a photo shoot is absurd and egomaniacal, and all the makeup and lighting umbrellas in the world won't make him look as good as he did on the cover of Fighting Stars magazine.
Posted by Foodberg at 9:15 PM

Email ThisBlogThis!Share to TwitterShare to FacebookShare to Pinterest
Labels: personal