Two holidays in one 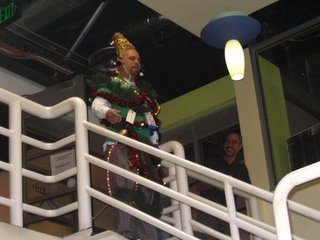 This Halloween, Google Santa Monica had a costume party and contest. I went as a Christmas tree. This was my last-ditch effort costume, because Queen Wifey and I, while wandering through Savon with no ideas at all, stumbled into the Christmas aisle. My first response was my typical disdain toward the Christmas consumerism, but twenty minutes and fifty dollars later, we were stuffed with Christmas goodies.

Like I said, it was a Christmas tree, complete with garlands, a Christmas tree hat, ornaments and working lights. I had to bring two extension cords to the office in order to have any sort of mobility while being lit up. Leave it to the ops guys to offer me a UPS to carry around. One of the ops guys even offered me his his boss's UPS, said I could just unplug his computers from them since he wasn't even using them. They like me!

The lights, tethered to my two extension cords they may have been, but they still won me runner up for best costume. This was in part due to my brilliant vision, but also out of respect to me for being willing to wrap myself up in an electrical 120-volt death suit. Best costume went to my coworker who dressed up like she was taking a shower. No, not like that you sicko.

Later in the day, the ops guys took a large inflatable shark and my stuffed gefilte fish (seen on my left hip), attached the both to 30 baloons each, and sent them soaring 3 stories into the sky. They would have gone higher, but they were safely tethered to the ground. What can I say, it was a day of tethering.
See artist's rendering: